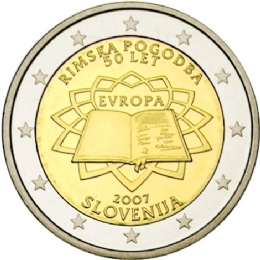 On 21 March 2006 the Economic and Financial Committee decided to issue a commemorative €2 coin on 25 March 2007 to mark the 50th anniversary of the signing of the Treaty of Rome.

The common European side is the same as the €2 general circulation coin. A new design was used for the common side (new to all except Slovenia, which has been using it since 1 January 2007), and this will help the public at large to become familiar with the new common European side.

The national side is the same for all countries, whereas the words “TREATY OF ROME – 50 YEARS” and “EUROPE” can be inscribed in the national language. The country of issue and date of issue (2007) are also inscribed. The circumference of the coin is the same as the general circulation coin.
The following inscriptions in Slovene are on the Slovenian coin: RIMSKA POGODBA, 50 LET, EVROPA and SLOVENIJA. The circumference has the inscription “SLOVENIJA” and a full stop (like the Slovenian €2 general circulation coin).

The Bank of Slovenia has prepared a special 2 € commemorative coin issued to mark the 50th anniversary of the Treaty of Rome (2007):