10th Anniversary of the Economic and Monetary Union (2009) 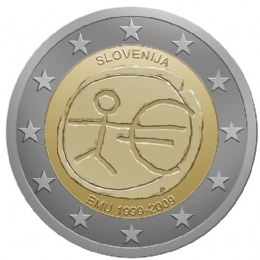 The Treaty establishing the European Union set out the three-stage process in which the Economic and Monetary Union (EMU) was created. The first stage began in July 1990 with the removal of obstacles to the free movement of capital. The second stage lasted from January 1994 until the end of 1998. During this period the European Monetary Institute, the European Central Bank's predecessor, was established. Member States were obliged to strive to meet convergence criteria. The third stage began on 1 January 1999 with the introduction of the new single currency in 11 Member States. The euro was initially book money, with banknotes and coins entering circulation in 2002. The European Central Bank (ECB) and the central banks of the European Union Member States that introduced the euro created the Eurosystem, while monetary authority for the new currency was transferred to the Governing Council of the ECB. The exchange rate mechanism (ERM II) and the Stability and Growth Pact entered into force.

The European Commission proposed that the EMU Member States issue a commemorative €2 coin to mark the 10th anniversary of the EMU. The coin will have a common face, with the only difference being the inscription of the issuing country. The MDWG invited all European mints to participate in an original design competition, in which 42 designs were submitted for the coin. Residents of the European Union were invited by the Economic and Financial Committee to vote in an on-line survey for one of five motifs in the final selection process. Some 141,675 persons participated in the survey. The winning motif, receiving 41.48% of the votes, was designed by George Stamatopoulos, a designer at the Greek central bank. The motif on the coin depicts the euro as the fruit of the long history of trade between people, from the bartering of goods in prehistoric times to an economic and monetary union.

The Republic of Slovenia also joined in this project and issued a commemorative coin in honour of the anniversary of the Economic and Monetary Union.