200th anniversary of the Botanic Gardens in Ljubljana (2010) 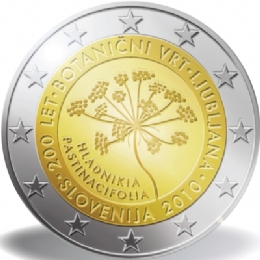 Alongside the National and University Library, the Botanic Gardens in Ljubljana are Slovenia’s oldest continuously operating cultural, scientific and educational institution. They were opened in 1810 as the Garden of Native Flora, at the École Centrale. They were designed by Franc Hladnik (1773–1844), who was also the first director. In 1920 the gardens came under the aegis of the University of Ljubljana, and today they are still part of the Department of Biology at the Biotechnical Faculty. The Botanic Gardens were awarded landscaped natural monument status in 1991, and then gained national monument status in 2008. While not among the very oldest gardens in Europe as a whole, they are the oldest botanic gardens in south-eastern Europe. The gardens are a member of the BGCI, the world organisation of botanic gardens, and each year participate in the exchange of seed lists with over 300 botanic gardens around the world.
Today the Botanic Gardens cover two hectares, with more than 4,500 species, sub-species and varieties, of which more than a third are from Slovenia, including certain endemic species, while others are from various parts of Europe and further afield. The gardens are also home to endangered plants, and even species that have vanished from the natural environment in Slovenia. In addition to the aforementioned endemic species, there are rare marsh species that once grew in the Ljubljana Marshes. They also conduct research into intraspecific variation in individual examples of flora, which is very intense in Slovenia because of its geography.

The Bank of Slovenia has prepared a special €2 proof commemorative coin issued to mark the 200th anniversary of the Botanic Gardens in Ljubljana: 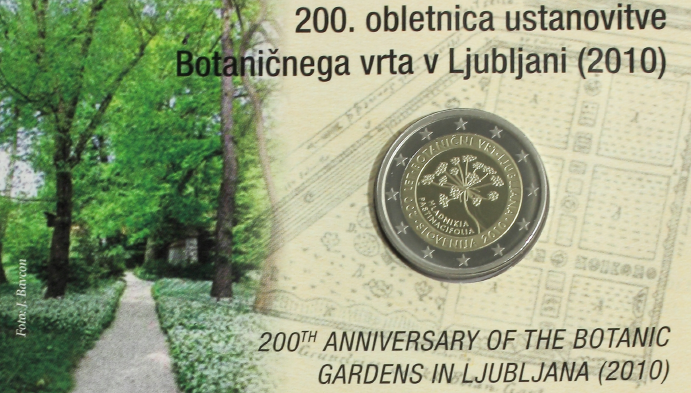