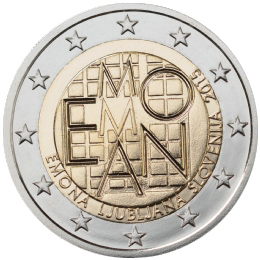 Emona (Colonia Iulia Emona) was a Roman urban settlement in the middle of what is today Ljubljana. In the first two decades of the 1st century C.E., in the area between the River Ljubljanica and Šiška Hill on the left bank of the river, the Romans built a town with a rectangular layout, enclosed by a stone wall and double moat. Within the wall was a grid of rectangular streets that divided up the space into residential blocks. The central urban space was the Emona forum, which served as the administrative, public, religious and mercantile centre of the settlement.

In the year 14 or 15 C.E. a marble tablet was affixed to a prominent public building in Emona, bearing an inscription referring to Augustus Caesar and his successor Tiberius. A portion of the tablet was found close to the eastern gate of Emona (in the vicinity of what is today French Revolution Square). In the year 14 or 15 construction of some public building was completed in Emona – something important enough to warrant the patronage of the two Emperors.

The found portion of the marble tablet with its imperial inscription and other remnants of Roman Emona are among the most important cultural monuments in Slovenia. Although Emona was damaged by the Huns in the 5th century and later fell into ruin, the original elements of the Roman town and its grid of streets formed the basis for the urban development of modern Ljubljana.

Sources: National Museum of Slovenia and City Museum of Ljubljana

The Republic of Slovenia is issuing a commemorative coin to mark the event, which has great historical, cultural and social importance for Ljubljana and Slovenia. The main feature of the coin is a composition of letters making up the inscription “EMONA” or “AEMONA” and a stylised plan of Emona.