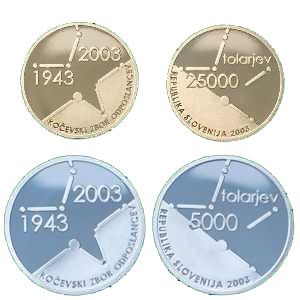 The decisions made by the Assembly of the Slovenian Nation’s Delegates changed the status of Slovenia, which before the war was one of Yugoslavia’s administrative units or banovinas. At the Assembly, it was given the status of a state within a larger federation. With this decision, the Assembly in a small Slovenian town, surrounded on all sides by enemy forces of the Third Reich, laid the foundations of Slovenian statehood. The final goal was at last achieved in 1991 with a successful referendum on Slovenia’s independence and the expressed voice of a nation that always yearned for its own independent state.

With the special issuance of coins commemorating this exceptional event in occupied Europe, the Republic of Slovenia rises above different political perspectives and events from recent history and acknowledges all those who refused to bow to the demand: “Make this country German again!”

The commemorative coins feature stylised elements of the five-pointed star that are arranged around dots and symbolise the path trodden by different groups of delegates as heralds of the Slovenian nation, groups which were formed in 1943 and which set out on the several-day long journey to Kočevje, represented on coins as a large dot.