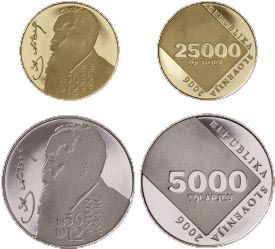 Anton Aškerc, the leading epic poet in the Slovene lands in the 20th century, was born on 9 January 1856 in Globoko pri Rimskih Toplicah. He attended grammar school in Celje, and then went to study at the seminary in Maribor. As a priest he served in several parts of Štajerska, but clashed with the church authorities and retired early. Then until his death on 10 June 1912 he worked as the first city archivist in Ljubljana. His appointment saw the beginning of the systematic and continuing archive work at Ljubljana town hall, the first archive institution to operate independently in what is now Slovenia.

Aškerc first wrote lyrical poems, but turned increasingly to epic poetry after 1882. His lyrics professed patriotism, love and religious doubts. He took his themes for ballads and romantic poetry from Slovenian and Slavic history, the bible and folk heritage. Having had several anonymous poems published in Zgodnja Danica, he then published in Zvon and Ljubljanski zvon. His poetry is best-captured by his first two collections Ballads and Romantic Poems and Lyrical and Epic Poetry.

His impressions of travelling in foreign lands were recorded in the travelogues Journey to Istanbul and Two Trips to Russia. He also did translation work, particularly of Russian poets.

To honour the 150th anniversary of the birth of the poet Anton Aškerc, the Republic of Slovenia has issued commemorative coins featuring an image of Aškerc, the years of his birth and death, and a copy of his signature.