Banka Slovenije has conducted its quarterly assessment of cyclical risks in Slovenia. Based on the indicators of imbalances in the banking system, our assessment is that cyclical risks in Slovenia are growing. This is gradually increasing the need to activate the countercyclical capital buffer (hereinafter: the buffer), but given the uncertainty surrounding the future outlook, the buffer has on this occasion been held at 0% of the total risk exposure amount.1 At the same time our assessment is that in the event of the current trends in the observed indicators continuing over the following quarters, there will be a need to consider introducing a positive buffer rate, which the banks would provisionally have to begin meeting one year after introduction.

The purpose of the buffer is to protect the banking system against potential losses insofar as these are related to an increase in risks in the system as a result of excessive credit growth. The buffer thus directly increases the resilience of the banking system, and prevents excessive credit growth. The buffer rate for Slovenia is set between 0% and 2.5% of the total risk exposure amount (or higher in exceptional cases), in steps of 0.5 percentage points. When the defined buffer rate is higher than zero, or when an established rate is being raised, the new buffer rate begins to be applied 12 months after the announcement. In extraordinary circumstances, a new buffer rate may also be applied less than 12 months after the announcement.

In the event of the reversal of the credit cycle or a decline in risks, the buffer rate is either reduced or fully released (to a zero rate). Indicators that react rapidly to financial stress apply to release. The release of the buffer is subject to a higher level of uncertainty, and requires a high level of discretionary judgement. The immediate release (or reduction) of the buffer helps banks to cover losses, while maintaining lending to the real sector and meeting the regulatory capital requirements. The countercyclical application of the buffer can mitigate the pro-cyclical behaviour of credit institutions, who might otherwise limit the supply of credit to the real sector.

Banka Slovenije calculates a buffer guide2 on a quarterly basis in accordance with Article 233 of the Banking Act (Official Gazette of the Republic of Slovenia, Nos. 92/21 and 123/21 [ZBNIP]; hereinafter: the ZBan-3). The buffer guide meaningfully reflects the credit cycle and risks due to excess credit growth in Slovenia, and takes into account the specificities of the Slovenian economy. In setting the buffer rate Banka Slovenije takes appropriate account of the methodology of the BCBS (2010)3 and the ESRB (2014)4. In accordance with the ESRB guidelines, six indicators of risk in the system have been selected as guidance for setting the buffer rate. The following criteria were taken into account in selecting the indicators:

Because the calculations of indicators are based on past developments, it is necessary to subject the buffer rate signalled by the indicators to expert assessment, and to take account of any new findings. 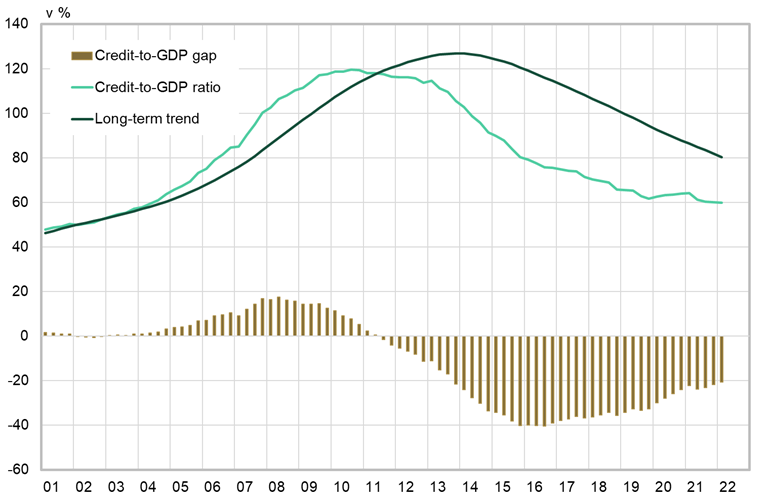 Table 1 gives the values of the indicators in the first quarter of 2022 and the corresponding historical averages. The table shows that the credit-to-GDP gap is negative (at 20.6%), whereby the credit-to-GDP ratio stands at 59.8%. The gap between the credit-to-GDP ratio and the long-term trend is still profoundly negative, on account of the extremely high growth in lending to the private non-banking sector in the period before the global financial crisis.7 Annual growth in prices of existing flats stood at 19.9% in the first quarter of 2022, well above the average over the period between the first quarter of 2001 and the first quarter of 2022. Growth in residential real estate prices rose sharply last year, surpassing the previous record rates seen in 2008, and has strengthened further this year. Last year residential real estate prices passed their previous peak of 2008 in nominal and real terms. High price growth meant that Slovenian residential real estate became relatively overvalued last year, and the continuing high growth in prices is increasing this overvaluation even further this year. Growth in credit to the private non-financial sector, which last year was driven primarily by growth in housing loans, has become more broadly based this year, as growth in loans to non-financial corporations has strengthened sharply. Growth in credit to the private non-financial sector stood at 5.8% in the first quarter of 2022. The high growth in housing loans and loans to non-financial corporations meant that Slovenia had the highest rate in the euro area. The LTD ratio for the private non-banking sector is lower than it has been in the past (at 0.7). This indicates that lending is primarily being funded by customer deposits, which are a more stable source of funding than wholesale funding. However, the high share of sight deposits (more than 80% of deposits by the non-banking sector) means that the risk of an outflow of deposits remains relatively high. The banks performed well in the first quarter of 2022: ROE stood at 11%. After a long period of net release of impairments and provisions, the banks are again recording positive impairment and provisioning costs this year. Net impairments and provisions remain low relative to total income. The ratio of credit to gross operating surplus, which is a measure of private-sector indebtedness and reflects the corporate sector’s capacity to finance debts, remains low. As a result of the high growth in residential real estate prices, and the faster growth in loans to the private non-financial sector, which this year has become more broadly based, cyclical systemic risks are rising, which is also increasing the need to activate the buffer.

Sources: SORS and own calculations.

Various transformations (quarterly, one-year, two-year and three-year) were tested for each of these indicators with the aim of identifying those with the best predictive power. The two-year or three-year changes in the indicators have the best predictive power in forecasting a crisis. When these are used, the individual indicators rise or fall for approximately five years before the outbreak of a systemic financial crisis, and usually hit their peak or trough one to two years before the crisis, which are desirable attributes for early warning indicators. 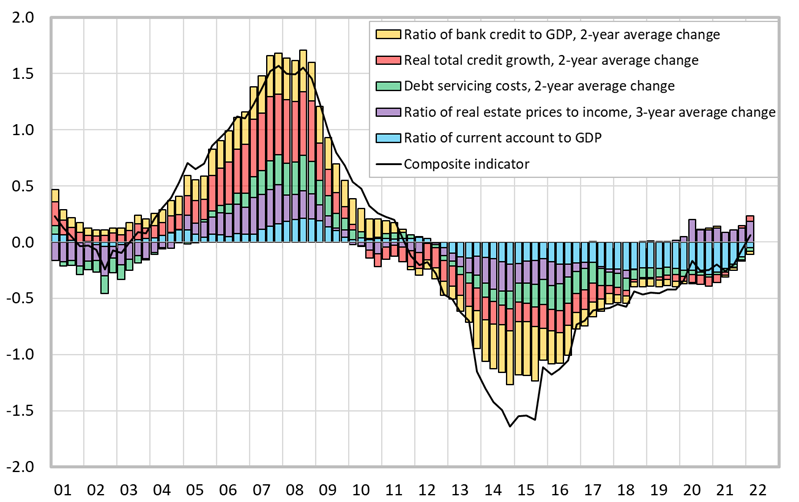 In accordance with Article 232 of the ZBan-3, each bank is required to maintain an institution-specific capital buffer equal to its total risk exposure amount multiplied by the weighted average of the countercyclical buffer rates calculated in accordance with the Regulation on the calculation of the institution-specific countercyclical capital buffer rate for banks and savings banks (Official Gazette of the Republic of Slovenia, Nos. 55/15, 42/16, 9/17 and 92/21 [ZBan-3]) on an individual and consolidated basis, as applicable in accordance with Title II of Part One of Regulation (EU) No 575/2013.

1 Banka Slovenije introduced the macroprudential measure of a countercyclical capital buffer pursuant to a resolution passed by the Governing Board of Banka Slovenije at its 546th meeting of 8 December 2015. The measure has been effective as of 1 January 2016.

2 In accordance with the Recommendation of the ESRB of 18 June 2014 on guidance for setting countercyclical buffer rates (ESRB/2014/1), the buffer guide is not intended to give rise to an automatic buffer setting or to bind the designated authority.

5 Static analysis on the basis of historical data (roughly 2004 to 2008) is used to assess what the dynamic of the buffer would be during a period of increasing imbalances in the banking system and in the wider system. The analysis neglects that the banks’ behaviour would most likely have altered had the buffer been active at that time.

6 Analysis by the BCBS shows that the credit-to-GDP gap is a useful starting point for guiding decisions on countercyclical capital buffer rates, but its performance varies over time and across countries. Given the diversity and the dynamic nature of financial systems, the specificities of national economies, and the significant differences in the availability of data in the EU, the designated authorities must take account of a range of information when assessing the risk level in the system as a whole, and must set the buffer rate accordingly. This information includes additional indicators that warn of an increase in risk at the level of the system as a whole. The quantitative and qualitative information used in this assessment, including the buffer guide and the additional indicators, lay the foundation for explaining and substantiating decisions on the buffer rate.

7 Growth in credit to the non-banking sector exceeded 35% in 2007. The private-sector credit-to-GDP ratio stood at 65.8% at the beginning of 2005. By the end of 2008 the ratio had risen by 44.4 percentage points to 110.2%, before peaking at almost 120% in the third quarter of 2010. The high credit growth, which outpaced GDP growth for a lengthy period, drove a sharp rise in the estimate of the long-term trend. As a result of the pronounced slowdown in credit growth after the global financial crisis and the sharp decline in the credit-to-GDP ratio, the credit-to-GDP gap fell sharply, reaching its lowest level (of -41%) in mid-2016. Since 2016 the credit-to-GDP gap has undergone a sustained narrowing.