100th anniversary of the birth of painter Zoran Mušič (2009) 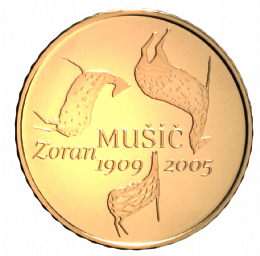 Slovenian painter, graphic artist and illustrator Zoran Mušič was born on 12 February 1909 in Bukovica pri Gorici. In 1915, and again in 1919, his family was expelled from Primorska to Styria. Mušič attended teacher training college in Maribor. He attended the Academy of Fine Arts in Zagreb, completing his studies in 1934. He settled in Ljubljana after 1940. In November 1944 he was interned at the Dachau concentration camp. In June 1945 he returned to Ljubljana, but left the same month for Gorica, and later for Venice, under pressure from the local authorities. In 1952 he held his first independent exhibition in Paris. Afterwards, in agreement with the French gallery, Mušič settled in France, where he was honoured with a large retrospective at the Grand Palais in 1995. Mušič was one of the "École de Paris" artists. He participated in graphic art biennials in Ljubljana, and was one of the leading European graphic artists of his time. He returned frequently to Venice, where he lived until his death on 25 May 2005. He is also buried there.

Zoran Mušič was a painter, graphic artist and master illustrator of contemporary Europe, particularly of the Karst and its surroundings. He primarily painted landscapes, ponies, portraits, self-portraits, scenes of suffering from the Dachau concentration camp, scenes from Venice, still lifes, dual portraits with his wife, Ida, and self-portraits in his old age. Mušič was the only Slovenian artist to break into the elite cultural circles in Italy and France during the 20th century. He became the standard and a mark of quality for all Slovenian artists. For his work, Mušič received all of the highest professional honours and national awards in Slovenia, as well as honours in France and Italy. (Source: Gojko Zupan)

To commemorate the 100th anniversary of the birth of painter Zoran Mušič, the Republic of Slovenia is issuing collector coins with the motif of Mušič's Karst ponies, with which he achieved his first success on the international art scene and which hold a special place in his life's work.
Original design: Domen Fras and Maja B. Jančič, Ljubljana.
Minting: Mint of Finland, Vantaa, Finland. 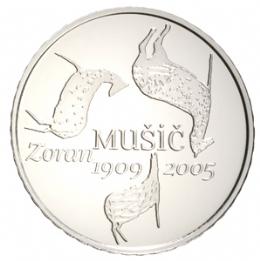